Wheels down, hit the ground running 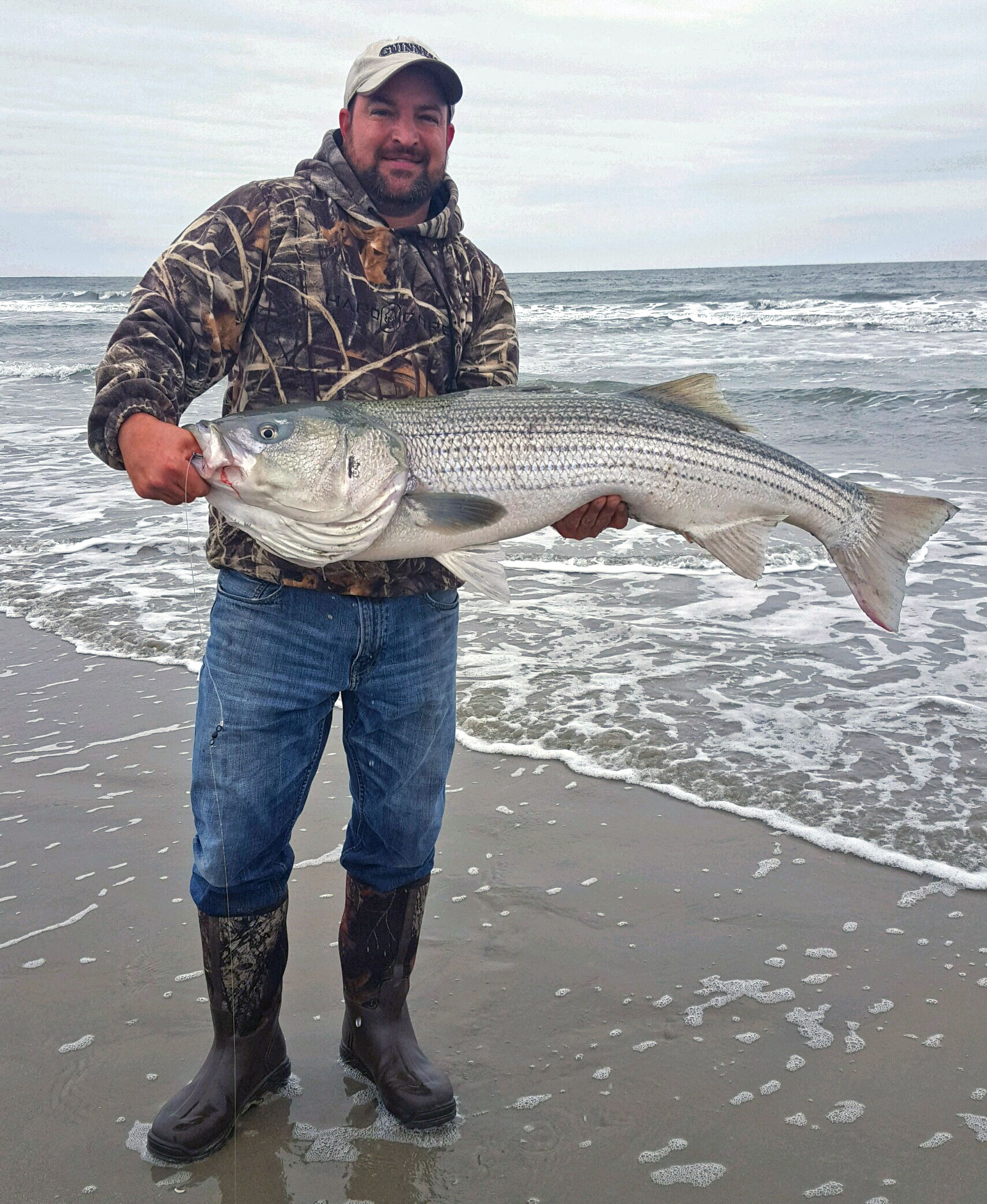 03 May Wheels down, hit the ground running

Wheels down, hit the ground running.  It’s full swing fishing on the Eastern shore.  I have spent my last few weeks in northern Greenland supporting a project studying the arctic climate, more on that later.  Saw some green grass along the runway at BWI airport Friday, 3 dozen peeler crabs in the back of the truck Saturday, slob striped bass in the cooler on Sunday, it’s game on. 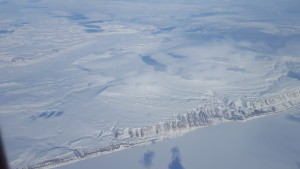 The terrain of Greenland near Station Nord

May 1st – 15th is the Virginia trophy striped bass season.  For this season you must register for a free permit, register online to the Virginia saltwater journal, report every time you fish, even if you didn’t catch anything.  Also measure and record the lengths of each fish caught whether kept or released.  OK, I understand Virginia is trying to get some data to do some fisheries science/management.  This can be a scary topic, fisheries management.  Look at what it has done to the Cobia regulations this year.  Data extrapolated from 18 fish (which may turn out to be 6 due to a typo) turns into huge estimate in total catch.  Then because a few people had a good day fishing on the day they happen to survey, they shut down the fishery because we are taking too much.  To see my point look at this quote, “In the 22 years from 1981 to 2003 Private Boats fishing along NC’s coast (from shore to 3NMs out) caught 426,000 pounds of cobia — all those 22 years, all put together, 426,000 pounds. Then, in 2015 alone, they caught 472,000 lbs.. ”  Now, no one or agency is sitting around checking every boat every day.  These weights are just extrapolated from the very few fish they do see.  It is EASY to see how turning a dozen fishing into a full estimate of catch by everyone can skew data. 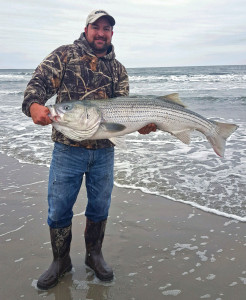 Jeffs 46.5 in striped bass off the VA surf

So what does that have to do with trophy season reporting?  Well, It is obvious that few people are reporting, or have done so in the past.  Obvious to me at least, where “the data” shows I personally have caught 17.5% of all the trophy rockfish in Virginia in the last 4 years.  I am not sure what year VA started the trophy season from May 01-15th but here are the report totals for those 15 days for the last few years

Total 80 fish, 14 were mine, So I am responsible for catching 17.5% all all the fish caught in the Virginia trophy season the last 4 years?  Pretty amazing huh, considering I see pics of big stripers from up and down the shore, hell look at Capt Steve’s website (stevesbaitandtackle.com) OR Chrisbait.com for the last 5 years and you can see them too, much more than 8 or 9 fish…  But science works by the book.  If you have a sample of 10 fish then you use that data.  So, because of this I am advocating that people actually report catches to VA.  One, it’s the law, yea I see that being a deterrent…  but two, it gives these people who do science for a living something to work with.  This is the only way that we as rec anglers can prove to the science guys what the true state of the stock is.  Without a large pool of data, the science can only determine so much.  As with the Cobia, they WAY overshot and closed it.  Say they do the opposite with the striped bass and open it wide for us.  Thinking, hey good for us!!  well, if the stock cannot actually take the pressure then it ultimately is bad for us.  I would personally catch the last fish and that would leave the rest of us with nothing, that is not cool.  No one likes to chase a poor fish more than myself but we don’t want to drive the last buffalo off the cliff.  Hopefully GOOD data can aid the science which will give us better stock assessments.  No one knows what fish are where better than the people who are on the water every day.  The science groups sit behind a desk most days, so it’s up to rec and comms both to provide an accurate assessment to them.  If we half ass it, they will half ass our limits, one way or another. 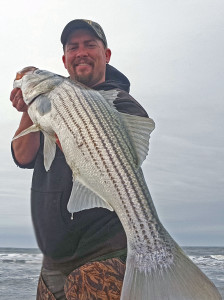 Phone ringing.  Literally, a guy calling me as I type this complaining on how cumbersome the VMRC website is to check in fish he got last night.  Come on VMRC, get your site together and we will do our part.  O yea, that phone call also told me the netter had 114 rockfish in his nets last night at Chincoteague inlet.  Not a fan of nets, Now, the man has to make his living, I understand that, and he is a good guy too.  Each of those fish will be tagged, with a number on the tag and reported.  It’s good for science, but bad for the fish.  One set just took more rock than will be taken off the beach in all of Trophy season in all of VA.  I respect commercial fishermen and the work they do, but nets are right behind draggers for me, not a fan. 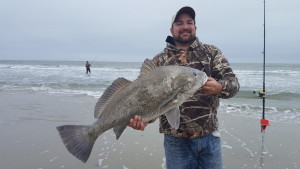 OK, enough about that.  Virginia Trophy season started off hot for us!  Sunday morning the rain was pouring down at 6am when I turned on the shed lights and started loading rods.  We were fine with a late start, Low water at 9am, no need for us to head over fast.  3 dozen peelers crabs from saxis the day before were tossed in the bait cooler.  Peelers are like gold this time of year, $15 a dozen for maybe legal size peelers…  no breaks unless you are family, my crab man said he was getting $50 a dozen for big soft crabs right now, I can’t even afford a soft crab sandwich like that…  Fellas start pulling up around 730 and we head to the surf.  The rainy morning kept most people off the beach.  Couple hardy soles had spots staked out well before we got there.    We started off fishing over a big trough that we couldn’t cast over, not our spot.  Quick survey of the beach and we made a move, got away from the “fleet” and found our own piece of dirt.  5 Skates, it wasn’t happening…  9:30am,  like a light switch, multiple hookups, rock and drum sliding up on the beach.  We were fishing 8 rods and there was a time when only 1 rod was left in the water after a blitz.  We put 20 rockfish on the beach that morning, keeping our allowed 4 fish over 36″ and putting the rest back.  Kept the drum too, one of my favorites to eat.  Left them biting at 12:15 after running out of bait.  Sore legs from running down the beach and sore arms from cranking, just what we needed to start our season off.  Going back today, hard to get enough, and it does not last long… 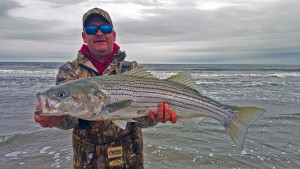 Nice striper on the surf

Some people will talk about the black drum having worms.  They are much more prevalent in the larger black drum than these smaller fish we catch in the surf.  However some still have them, like this black drum we caught that day.  Commonly called Spaghetti worms “Pseudogrillotia pIeistacantha” these worms are not true parasites of drum, but actually of sharks.  The worms are not harmful to humans and we usually just cut them out and go on.  I have been served a drumfish sandwich before at a restaurant and you could still see the worms left in, they won’t hurt you, but it make take some liquid encouragement to go ahead and bite down on them…   The spaghetti worms have an interesting life cycle.  So an adult worm lives in the intestine of a shark,  this worm when about 8″ long will release eggs into the water.  The eggs hatch and then, apparently have about 2 days to be eaten by a copepod (very small crustacean that swims around.)  At this point, a small fish or a crab, will eat the copepod, then the drum eats the crab/fish.  From here the worm tunnels out of the drums intestine and into the flesh where it set up shop, fairly dormant, until a shark eats the fish, and the cycle starts over.  Nature, you crazy.. 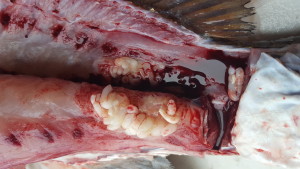 Parasitic works in the tail section of a black drum

So whats next?  Surf fish for the next two weeks.  Near the end of that we will start migrating to bayside to chase the bull reds.  There have already been some caught this year.  Our first one last year was May 14th.  It’s hard to keep up in the spring with so many fish to chase, and toss in turkey season, there is no time left!  Now go catchem’ up! 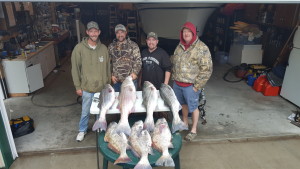