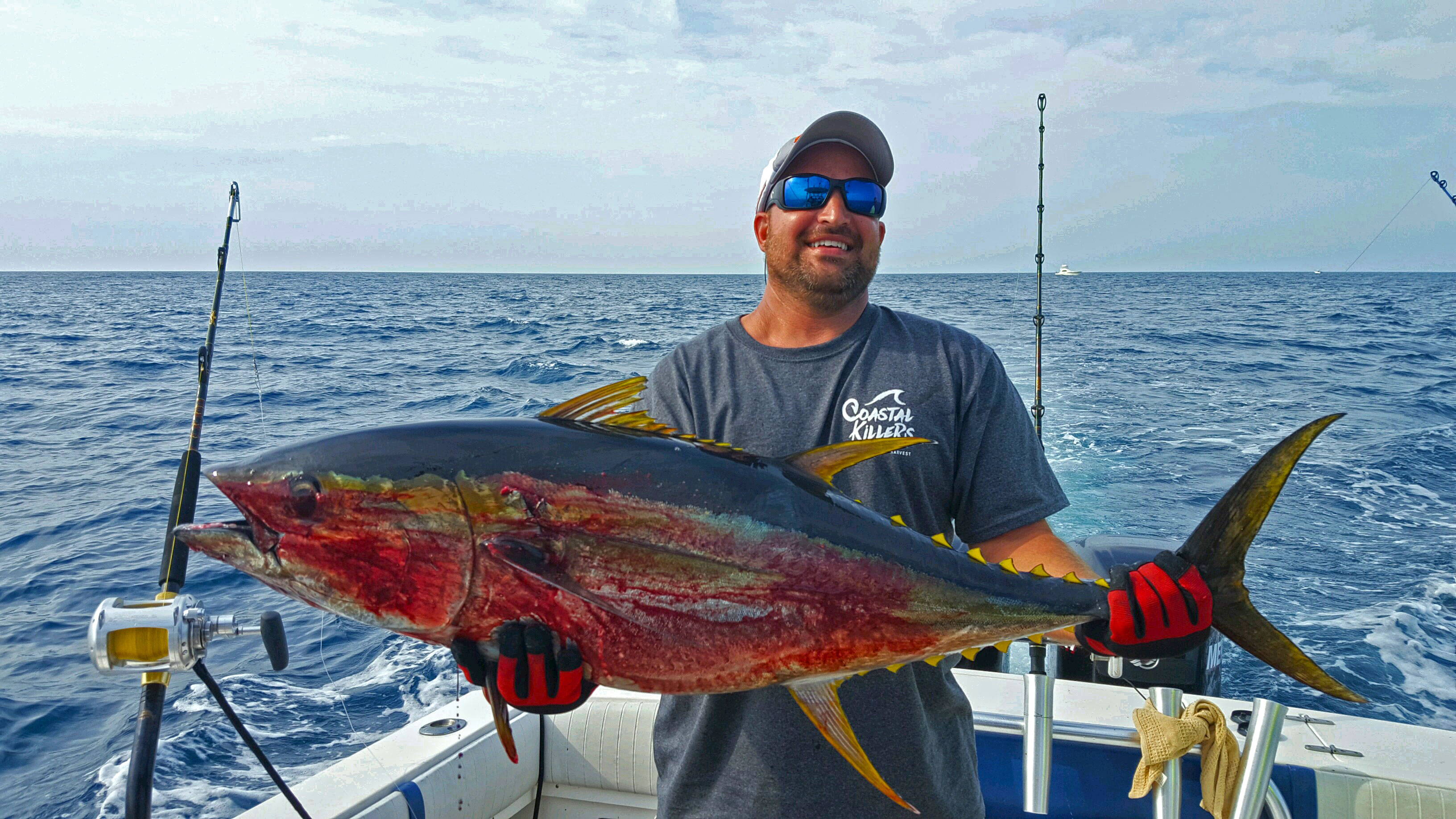 I have been asked a few times, what is this?  What is going on here, with this website, this facebook page, this logo, what exactly is “Coastal Killers”  To sum it up in a simple short answer, it’s a lifestyle.  Maybe call it a lifestyle brand.  But the real answer is much more.  Yes, the name sounds edgy, some don’t like it, some love it.  There is no hiding what we do, but at the same time we also have a respect for our resources and may understand them more than many non-sportsman people.  This started out as a way to put out videos and pictures we all would take of our adventures, be it hunting, fishing or building a giant pumpkin launcher, anything really.  I say “we” because it can’t be done without others.  “We” is a collective term, not meaning necessarily certain people, but rather like minded people in general.  We all share similar passions, we all like to take to the woods in the fall or chase fish in the spring.  We all have a similar mentality when it comes to living our life.  If you are here reading this, it’s because you share that mentality.

To break it down a little further, when you come from a small town, you grow up knowing most of the people around you.  I can ride down our back road here and most houses I pass I know the people.  We are a network, we all have each others back.  Some places will talk about the “good old boy network”, mainly when discussing politics or court cases etc.  People on the outside think of it as unfair or bad practice.  The people of the Eastern Shore are referred to quite often as a different group, a group where the good ol’ boy network is alive and well.  Truth is, they are right.  Up and down the shore, Cape Charles to Tyaskin to Smyrna, we are all included.  Step across the bay for a moment, head to downtown Baltimore or DC and walk down the street.  How many people say hi, or even look your way, People are everywhere, but almost like zombies.  Now swing on back to this side and take a walk down main street in one of our small towns, say Parksley, or Berlin.  I guarantee people passing by will say hi, or even hold a door open for you.  Maybe we are 50 years behind like some suggest the Eastern shore is, if so, that is fine with me and fine with “us”.

This small town network is not localized just to the shore.  It is all over the country and world.  Small towns in Georgia, or Wyoming, on even New Zealand all share this same trait.  Isolated small towns in Greenland and even McMurdo base in Antarctica all work in the same manner.  If it was not for growing up in a small community such as this, I feel like I would have nothing.  We rely on others for help, and it takes a full network of people to be successful, in a single fishing trip or in life in general, you can’t tackle the world by yourself.  Trading favors is what it’s all about and without good friends, I sure wouldn’t have much.  Take for example the boat this spring.  I have needed welders, fiberglass guys, mechanics, pipefitters, electricians, fishermen, flooring guys, people with shops full of spare parts and metal, the list literally goes on and on.  Also a big shout out to Sea Hawk Sports Center that keeps us stocked with everything we need to be successful.  Guys like Matt who run the tackle shop are exactly the kind of people I am talking about here.  To think I could take care of this simple small boat by myself, there is no way.  All these people go out of there way to lend a hand.  It goes both ways too, We pulled in a broke down boat 26 miles off the beach last week.  Guy I have known for years, but have not seen in years, called on the radio that he lost his lower unit, 4 hours later we have him back to his marina.  Maybe the guy with a net worth of a couple billion can do it, some say all it takes is money, but without a good network of people on your side, it can’t happen.  If it were not for friends, we would not have much.  This is a big thanks to all the people in our good ole boy network. 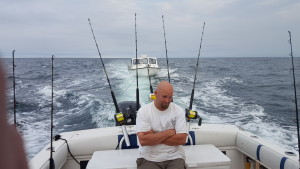 Towing in a boat, never fun, but Its all part of it.

On to the fishin!  It has been a busier than normal summer and my writing is suffering.  But, a rainy sunday morning sipping coffee nursing a sore back after the Grady beat us up yesterday is a good way to write.  I left off a little more than a month ago watching some warm water pushing up from the south, and it made it!  First pelagic fishing trip, out to no man’s land 500 fathoms behind the Norfolk canyon.  209 mile round trip, heck of a way to break in the boat.  The Gulf stream water that pushed in was holding fish.  Lines in the water about 7:30 and a tuna bite 15 minutes later!  Put our first yellowfin in the box, nice way to start but then 3 hours later without a bite…  The seas laid of for us during the day.  A big ass mako sky’s out on our long rigger and takes the bait just behind the hook.  At least we all got to see him cartwheel, pretty damn amazing site.  Right at noon we got another tuna bite and then put a mahi in the box.  Around 1 the long shotgun line goes off and we get a smaller mako, really calm.  It strange how some Makos can be totally nuts and other docile as sloth coming up to the boat.  Either one you get they both turn into the same beast when a gaff hits em’  Have you billy club ready, he needs a knock in the head, to make him act right.

Some yellowfin after a successful trip to the canyon

With a slower bite in the afternoon we decide to pull lines and hit a wreck for a few sea bass on the ride in.  As we are pulling lines the ocean turns into a mass of hammerhead sharks.  Looking around I bet we see a dozen finning all around us.  Not sure what had them concentrated in such a small area, but you know we just can’t leave them alone.  Out comes the big spinning rod and a half bunker on wire leader.  7’ hammerhead hooked up!  I actually fought him for a while until I got tired of him beating my ass, passed him off and took some cool video.  The ride in was like a minefield, I have never seen so many sea turtles in my life.  For a stretch of about 8 miles there were turtles everywhere.  I bet we could have counted over 100, it looked like crab pots in Pocomoke sound…  Busted the bass on the way in, they sure do eat good. 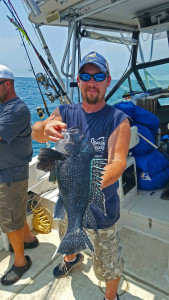 A nice knothead seabass from the local wrecks

Gulfstream water with tunas, It like a drug to some people, people like me.  So back at it next chance we had.  This time the water had pushed up behind the Washington canyon, another 200 mile trip.  There were three boats of us starting in different places along the break.  No bites for the first hour then we must have passed something floating, 7 out of 8 rods went off hooked up with some nice mahi.  It took a while to stack the bites too, leaving the boat going is key, don’t pull back for a good 30 seconds after a bite, and sometimes much longer.  Somehow in the tangled mess of mahi we land every single one.  We were the windshield not the bug on that pass!  The guys up the line start hammering micro tunas so we push up.  Skippy after skippy for us, a shark even ate one we were cranking in.    Finally got a tuna bite, thank goodness for that one.  I think we broke everything possible on the boat that day, riggers snapped, rod holder busted, lights broke, transom bracket and motors getting ready to fall off.  The boat is not kyleproof yet, but she’s getting there… 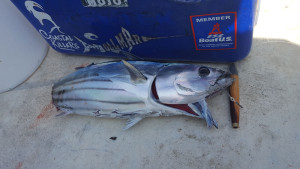 Was a bad day to be a skipjack tuna…

Switched to our bayside boat while the other was being fixed up.  Time for a little bayside cobia action.  Left from Maryland around lunch and ran south.  Setup a chum slick and here they came.  Saw 3 boated 2, nice way to spend the afternoon and back home before dark.  Tried to do the same trip a few days later, this time we were the bug, saw 3 caught a big Zero…  Those I call learning trips, learned what not to do next time… 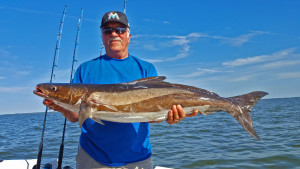 Cobia caught in the Chesapeake Bay

Boat is fixed up, warm water is back south, out to the canyons we go again, another 200 mile round trip,  200 fathoms in between the Washington and Norfolk.  This time I had my old boat captain with us, sure felt good to work together again.  He had the wheel and I got to play in the pit all day.  Highlight of our day was landing a stud Wahoo.  First one I had heard of this season.  Went 70lbs, man they are awesome fish.  Make sure when you have a wahoo on that the boat never stops.  They are smart fish and they want to hide under your boat.  If you slow down too much he will run right under and be gone.  When we saw it was a big hoo we pushed the boat up fast enough that he couldn’t get to his hiding spot…Gotcha hoo…  There was a lot more small tunas and we ended the day catching 9 yellowfin with 3 keepers.  I think the bluewater bug bit my old capt again that day, it happens.

One of the greatest fish in the ocean. They are fast and mean!

Next trip we stay inshore.  It sure feels good to run to 20 fathoms instead of the long runs we had.  Birds, bait, slicks, we landed right on a good spot.  Plan of the day was half day trolling half wreck fishing.  Got our first bite on the long line setup for Bluefin.  Turns out it was a 40lb yellowfin, Cool!  Reset and catch a couple mahi, then have another bite, this time in close.  Another nice yellowfin.  11:30am, time to wreckfish.  Who in their right damn mind would leave picking birds with yellowfin to go wreckfishin’, I’m still not sure about this choice…  But, I do like catching seabass and flounder, and that is exactly what we did.  There was a real nice class of bass on the inshore wrecks.  We couldn’t even flounder fish because the bass were pounding on us so hard.  Not a bad problem I guess.  Finally we moved inshore enough we found the flounder.  Toss 9 in the cooler before a storm drive us on in.  Nice mixed bag and way to change it up. 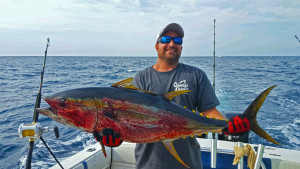 Quick update:  one last tuna trip before headed out for work.  51” bluefin.  Had to work for the bite, but we got it.  Just right. 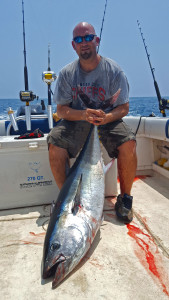 Caught a nice bluefin on the troll in 20 fathoms

Whats next?  A work trip to the top of Alaska, they tell me, ”you might be there 5 days or 3 weeks”, hmmm… ok..  If I am lucky they will be doing their annual whale harvest and I might be able to get some pretty wicked pictures at least.  Fishing wise?  Flounder time on the wrecks, one of my favorites.  With tunas inshore though, going to be some hard choices.  It might be time for a overnight trip coming up too, wondering if the bigeye will show up like last year.  I still need that sucker…