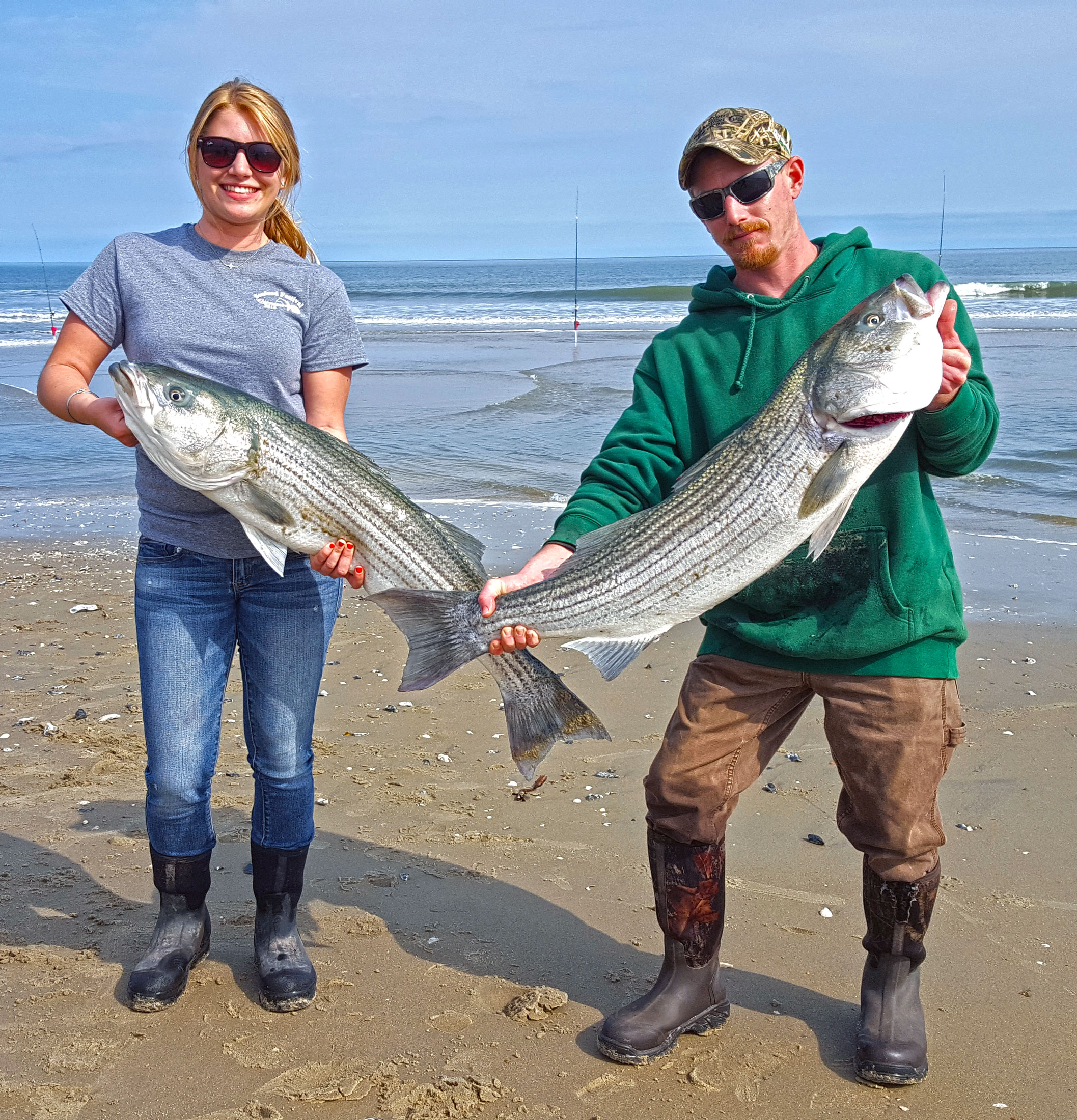 24 May Surf fishing wrap-up, new fisheries data and a look towards summer.

First we need to address the last post on here as was just plain wrong, but based on the best available data I had. After contacting the VMRC about the trophy season data, their very helpful IT guy has opened up the trophy season data for 2015 and 2016. You can now view the data yourself on the vasaltwaterjournal.com website. Now, the last post talked about a lack of reporting, but that was only because the reports that were available were entered in the wrong location on their website. Now that the full data set is released we can get a better grasp on how many fish were caught during the 15 day season. This set is not perfect. There are still fish being reported in the wrong area of the journal for trophy season dates. There are fish being reported with a zero length and some with wrong length (one fish was report 3 inches.) So, to get a better grasp, I combined both the data from the trophy season reports, the data from the saltwater journal standard area for the days of May1-15. Then any obvious errors were removed (ie. zero length fish). After this filtering, for 2016 it looks like there is a reasonable data set of 93 fish kept and 88 released. To me that is a very respectable conservation effort! The average kept striped bass for 2016 was 39.7” and the average released was 30.7” 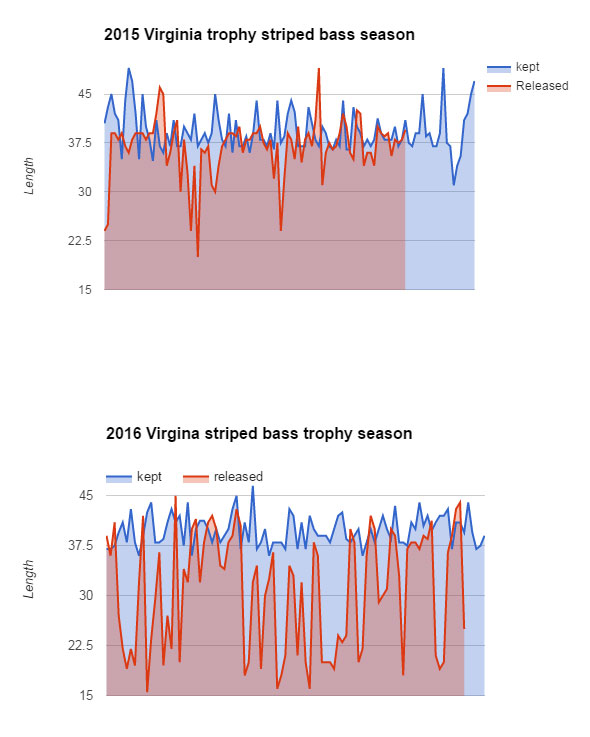 To compare with last years (2015) data, fishermen kept 108 fish and released 88 (yes this is the exact same number of releases for 2016, I checked it three times!) The average kept fish was 39.3” and the average released length was 36.8”. So, two plots below, 2015 and 2016. The main take away I see in the plots is that MANY more undersized fish were reported this year and not last year. It seems obvious there were two distinct classes of fish caught this year. The big breeders and then schoolie fish. Not sure if this is an artifact of better reporting this year on small fish or if in fact these schoolies were much more plentiful. We caught the small rock well late into the season in the Chesapeake last year and then again in the coastal bays in February. Sure seems like the striped bass had a good spawn for this class of fish. I believe this was even reported last year by the Maryland DNR. Some of these smaller fish are already all over the place, got a text that it was all you wanted of over 20” fish in the shallows around the banks, nice, that is fun fishing. 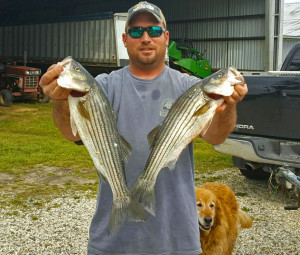 So, there is the data, with some filters applied. It looks like quite a few people reported! Great! Now the science has a decent set of data with which to work. It’s a start and I am happy that the VMRC released to to the public, that should do nothing but raise awareness. Kudos to them for listening to some random guy who called them up and asked for it. Nice work Mr. VMRC IT guy.

We put 34 stripers on the beach in 5 trips. Last two trips the tide was ass backwards and I proved to myself the reason I do not like to fish the wrong tide… So a decent spring run for us. The fish are holding off Assateague now and heading north quickly, but there are a few left down our way. Only had a chance to squeeze in one local bayside red drum trip which was a bust. Buddy boat caught one, we pulled on 30 bullfish and fed them 60 bucks worth of peelers, not how it was supposed to work. Reports of plenty of reds showing up in Maryland. Have not had a chance to get back on the bay since (although a few days in Florida has been nice:)

Getting it done on the surf 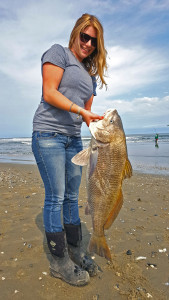 Landed 9 black drum on the beach this year as well

We got our first offshore trip in, seabass trip. Hit 8 different wrecks/live bottom pieces. Even found a new one, really happy on that little piece, in a perfect location. Numbers for structure do not come easy. I have spent uncountable hours plotting from old books, other people, marine science papers, hang logs and any other source I have been able to dig up. Doing some math algorithms to convert old Loran numbers to GPS. There are quite a few numbers on the internet that have been converted from Loran, most are off. BUT, most are off with the same bias, hint hint. Side scan helps the searching while on the water. It is very nice to have up to about 100ft depth, after that I start to rely on the standard cone ducer’. Knothead seabass come inshore this time of year to spawn. We caught a large number of blue head males, very few females actually. Had some really nice tog as well, on jigs, that sure makes it fun to hook a 10lb tog after you are used to catching 2-3lb bass all day. Love to eat seabass too, one of my top favorites. Little swell going out that flattened out for a nice ride home. We did give it a go at shark fishing inshore for 1 hour after seabassin’ Saw one in the spread that quickly disappeared, that was it for that. Can’t do it all in one day, but we try. 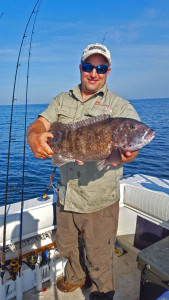 Season is closed so we released them all 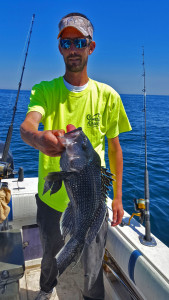 Pretty fish time time of year, in close too

I keep clicking refresh on the Rutgers sea surface website as I write this. I could see a glimpse of warm water way south at the Cigar. The second glimpse showed it had pushed into the Norfolk canyon. Waiting on a good shot and already planning a tuna trip as soon as my plane touches back down on the eastern shore. Weather looking good too, high pressure setting up for a few days. Its time!!

Here is the rutgers free SST website for the mid atlantic if you dont already have it
http://marine.rutgers.edu/cool/sat_data/?product=sst&region=chess&nothumbs=0

The VMRC cobia meeting is also going on. I hope that goes well, hard to say what will happen. I have a feeling a few cobes are already well up north, close to MD. Last year they made it up to the state line about June 1st, hopefully we have a chance to pick at a few before whatever changes in the regulations. Sad the feds closed it. Most our ocean side cobia are well over 3 miles, at least the ones we have seen. Hell schools are swimming around at the parking lot 30 off some years, just never know. So Cobia, redfish, black drum, tuna, and even specks have made a decent showing. Never enough time in the day to do it all, but we sure give it hell trying…