The start of Fall 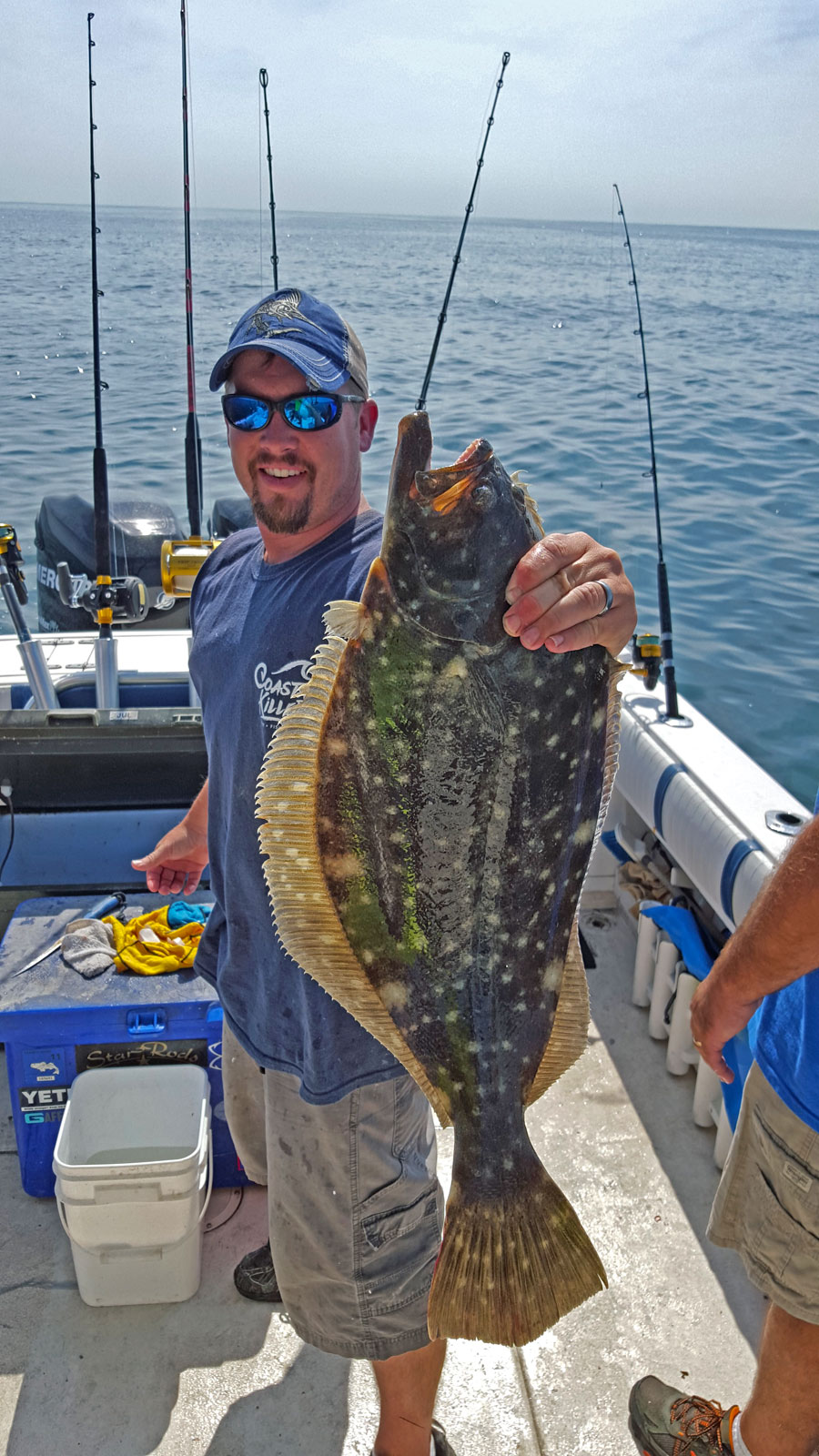 10 Sep The start of Fall

Middle of resident goose season, have not even dusted off the gun…   Friends are killing a few though. 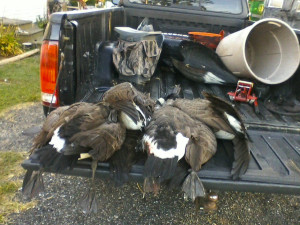 5 more hunting days left, it’s just hard to stop fishing!  Back to that for now…

Back offshore.  Last 2 trips we did kinda sucked, well strike 3…  Had a good weather forecast and we wanted to bail some dolphin on spinners, just like last time right?  Wrong…  So, thought we had a secret anchored ball out in 35 fathoms that we found last time.  It had 2 poly balls and a flyer, long rope to the bottom, the perfect setup that we found a week before.  Still should be right where we left it right?  Nope…  I don’t know where the thing came from or where it went, but she was gone.  Not even pulled the throttles back and we go to plan B, swing south, 8 mile run to the Navy buoys, figured we have a shot a dolphin even though we heard they were empty the day before.  Well they were right, no fish anywhere.  We had live peanut bunkers and they were pretty.  Just no damn fish to eat them…  OK Plan C, break out the trolling gear and head east until the water does not look like incredible hulk piss.  Took about 3 miles and we were in clear water north of the East wall of the Norfolk.  Had a wreck in 220ft that we never dropped on so push to that, find it, break out wreck gear and drop.  and back up. and drop again. and back up.  This is bullshit, not a fish one on this high relief wreck.  Back to trolling…

The topic of trolling….. I spent 8 years working on a boat where we trolled every single trip.  There was no jigging, no chunking, no wreck fishing etc.  Maybe it was this or maybe my attention span is getting worse because now after 3 hours of beating a dead ocean I can’t stand it, got to switch up.  We don’t have the big sportfisher with diesels that sound so good to fish either, the little humming outboards just make it feel like fish don’t pay attention to us like they would a sportie.  Anyhow, gettin’ ansy now, 2 hours into trolling get hit with a double of mahi off a floating stick.  Thank goodness we’re killing something today.  Still don’t have it in me to spend the day driving around the deep,  this was supposed to be a spinning rod trip and we have 20 live baits swimming around wondering why we are trolling and not playing with them.  It’s 10:30am, point her west, drop a pair of planers, were going to put fish in the box even if we have to flounder fish…  Catch 2 bonito on the deep rods about when we hit the green water again.  11:30am, yup, done trolling, off to hit the groundfish.  Attention span of a gnat… 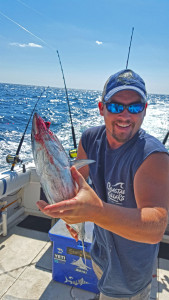 Stop about 12 miles off the beach.  Seabass, couple nice ones come over the rail.  A single flounder, hmm, there should be more here…  This is a small wood piece but there should be more.  Run more inshore, 6 miles off, ahh here they are.  6 flounder over the rail, again working a very small piece.  They slow down, halfway to our limit now.  Run inshore and North.  O we find them this time, first drop 3 guys hookup to keepers. 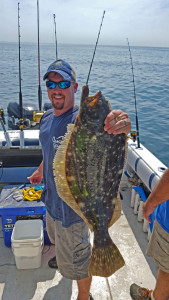 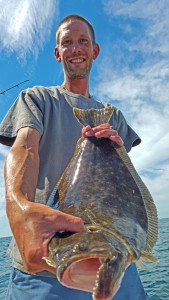 half hour later we are sitting on our limit.  Great, 160 miles of burning 2 stroke oil and we catch a box of flounder, wtf…..  Hey, we have a box full, that’s what I’m talking about. 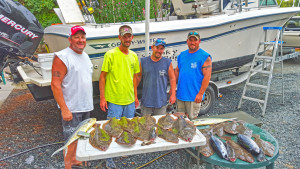 Clean fish, clean boat, what next?  Turn around and do it again…  Next day back to the wrecks, was going to be a quick morning trip, had some guys who had not been before.  Back to Flounder, and they were there.  Same two spots gave us our 4 man limit pretty early.  Never even stopped on the railcars, heard they were overrun with croaker.  Been getting a few nice triggers too at random times, damn they make good tacos.. 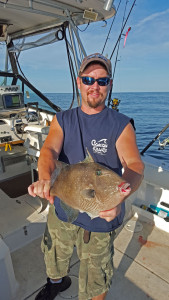 After the limit, we tossed out a bag of chum, kill an hour and try for a shark or cobia.  After an hour, and getting bored, our farthest balloon starts dancing.  Ha, look we’re getting a bite, HOLY SHIT! this damn spinner shark leaps his ass out of the water like a Mako would, except spinning in crazy circles.  He cleared 6ft in the air, what a show and all of us get to see it.  Few minutes later he is boatside getting his portrait taken then clip him off.  OK, cool some action, guys are happy, head on in early, lot of flounder to clean, just right… 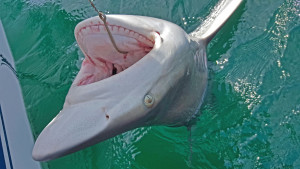 OK, enough flounder for a week, got a tip about Redfish in the surf, well, we like that!  September 3rd, hit the beach in the evening.  Toss the cast net on the way, bucket filled with fresh bunker, some live mullet and 2 live baby spot, o yea game on.  Hit the surf, 2 hours left of outgoing, setup the 8 rod gauntlet.  some bunker, some mullet and a live spot all hit the wash.  2 sharks come to visit and are tossed back, not bad sized suckers either.  Another rod goes down, this time with some head shake.  any dorsal fins in the wash???  NOPE, it was the right one!  So while shoving a camera in the face of this redfish the next rod doubles over.  Rest of the crew is down the beach playing footsie with another shark, so cameraman gets it!  First red comes on up, 31″ and then 33″ follows.  Hot damn, reds in the surf, life does not get much better, and we didn’t burn a drop of optimax oil! 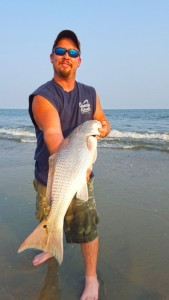 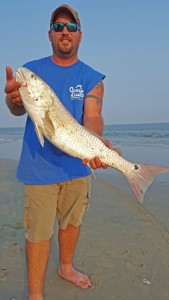 Stayed another hour as it got dark.  Well, I like to think of most of us as being pretty hard core when it comes to mosquitos, we live on the shore, grew up in the swamps, we can deal with mosquitos.  Well, a west wind on a barrier island at the edge of dark will make you question what the hell purpose do these biting bastards serve.  Looked down once and saw at least 40, no lie, on my arm.  At that point you don’t even feel them, you just going into a strange mindset where all you hear is buzzing and you just blow them off, literally.  IS all the gear packed up??  GOOD get the hell in the truck!  Insides of all the truck windows were stained with blood and dead bugs the next morning, ahh, loving life on the shore 🙂

Sept 7th, pretty forecast, shitty green water out past the canyons, well, not playing that game again.  What to do? back to flounder of course….  Sunday trip, want to get out and in fairly early.  Drop on railcars, nada.  Move off to our other pieces.  Here they come, a little slow than it has been and a little smaller class of fish, but they are biting. 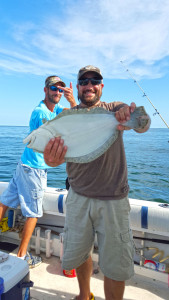 Some swell this day but NO drift, felt like we turned on the skyhook, makes flounder fishing tricky, would much rather have some drift…  Fat trigger over the rail again, gonna eat you good.  Anyhow, 10:30am the 16th keeper comes up.  Well, figured we give the cobia/sharks 1 hour then pack it in at 12.  Set Up a chum slick and don’t catch a damn thing whelp, back in nice and early, box full of fish and only ran 60 miles, not too shabby. 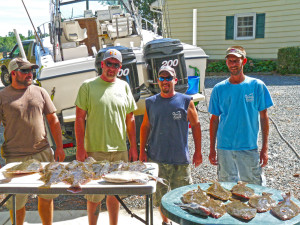 Most likely the last flounder wreck trip of the season, fish spread out and push off this time of year. This makes a total of 141 keeper flounder over the rail on the new boat this year.  So what’s next?  Moving bayside the next 2 weeks, Onancock bay Challenge is Sept 19th.  Going to try to find a bayside flounder or a hardhead or spot or any damn little fish.  Waxing moon last week of September this year and a good mullet run going now?  means Bull reds in the surf soon….  Will be there after playing in the mud puddle next week.

Still not done offshore.  Here are some late Chloro shots, looks at the shitty water deep.  Once that moves, were going to play again.  We need a broadbill this fall, he’s on the hitlist….

September 7th 8th and 9th below, go on crappy water, GET 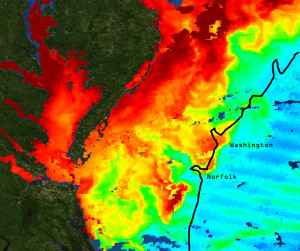 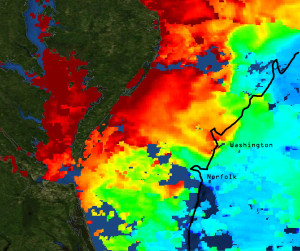 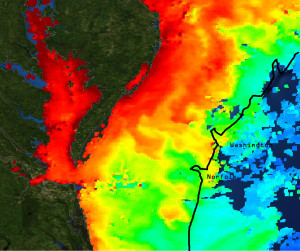