This is a little different, sometimes we end up in remote places and are lucky enough to get a day off to do some fun stuff.  This was the case during a trip to Greenland.  We talked with the local hunters who were in town for a dog sled race and asked them to take two of us out on the sleds for a seal hunt.  So, my Greenlandic sucks, their english was not much better but I think I got the point across having them take us.  We got all ready, went down to meet the guy at the time he said, 12:00 noon, and no guy…  I am sure you all have heard of island time, well Greenland is a big friggin island.  The sun hardly even sets this time of year so it does make it hard to judge time. 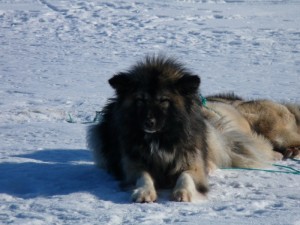 We sat around out on the sea ice for 2 hours, finally we spotted a couple sleds in the distance, and they were not headed our way, well shit.  I had setup this trip with “the best” hunter who came recommended by someone somewhere, but apparently he was not the best at remembering he had some crazy americans that wanted to go for a sled ride.  So fast forward to later that night, I head to the bar to track down a hunter, we only have 1 more day left before we leave and am still trying to get a trip in.  So, of course, I see my hunter buddy.  I go ask him what happened, (more of a shrug and a grunt motion)  He says “very sorry, very sorry” and some other words explaining he got sidetracked with something else that day.  O well, no problem, so I ask him about the next day.  He can’t take us, says he is going very far to hunt muskox with his own group of locals.  Sounds really cool, but too far for us (4 day trip)  So he sets us up with his brother and cousin. 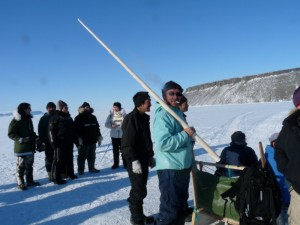 An inuit holds the tusk from a Narwhal whale in Greenland

These guys were really nice, one was in the bar that night, and the local hunters are known for liking their drinks.  So we proceeded to buy a few rounds for them, they got happier, we got happier, talked of hunting and fishing and polar bear claws, all the cool stuff.  They had shot a polar bear (nanuk in greenlandic) about a week before.  I saw some pictures of them skinning it, way cool.  All looked good for a trip the next day.  Whereas the first guy had told us we had to shoot his rifle at a target to make sure we could shoot, these guys mentioned nothing about that, so whatever, at this point I am game for anything.  So the dogsled race was the next day, they were going to do the race, then take us after, cool, race wasnt that long.  and were on our last day so we didn’t care what time.  So, more beers, more talking about whatever we could manage to translate and then we headed back for a well needed rest.   Damn, the sun is still up, hard to get used to… 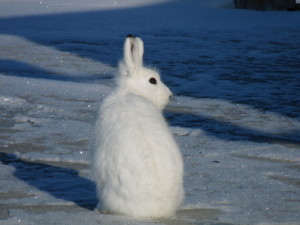 Rabbit being a rabbit

The sled dogs in Greenland I think are treated a little rougher than the ones you see on tv in Alaska.  These dogs are born and bred to work, they are not pets, they seem half wild and the do not have an easy life, at all.  But, they know their job and do it well.  We headed down to the race about noon, saw all our Greenlandic buddies gearing up, they seemed in better shape headache wise than us…  The race went off on time, about 18 teams participating, a good turnout considering how remote we were.  A young guy won it, who has also won it at least 3 out of the last 5 years.  First place was a new rifle and scope, not a bad deal! 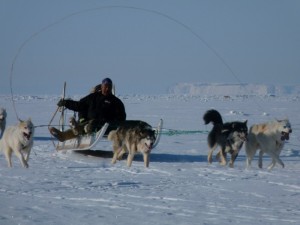 Coming in to the finish line 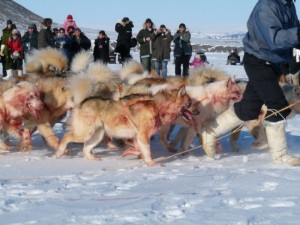 So after the race, we met up with our two guys who were hungry, so off to eat first.  By the time we met back up at the dogs it was around 6pm, they said we should be back by 10pm.  Now is a good time to mention it was freaking COLD, during the day it was about -8F and now it was closer to -15F.  But the wind was not blowing, yet…  So we hookup the dogs and off we go.  about 45 mins later my guy stops the sled and reaches into his backpack and pulls out a brand new set of binoculars.  He had won them at the race for finishing 3rd place.  He unpacks them then takes a gaze over the ice.  He hands them to me and points and says something that sounds like “Puuysik” (actually spelled natsiq), which means seal in Greenlandic.  Sure enough, I take a look and there are 2 seals laying out on the sea ice about 1/2 mile away.  We wait for the other sled to come up behind us and the two guides chatted for a bit.  I couldn’t not understand a single word but I have the feeling the conversation went about like this.

“Hey Quannauaje, there are two seals over there”

“Yeah, they are far away and its cold out here, screw those seals and lets take these idiots to the net and see if we caught one”

“OK, we will just tell them that we already scared them by being too loud and go to our trap and hope there is one in there”

So, they tell us that the seals have already heard us and we cannot get close enough to actually take a shot on one.  Cool man, whatever, were out here to do anything.  So we keep riding and come up to a pressure ridge in the sea ice.  This is where two chunks of ice push each other a it pops up, a good place for a seal to breath.  It was also apparently a good place to string up a seal net.   We got off and they checked two nets, one of which was very tangled.  these guys were working with bare hands on the wet net.  It was so damn cold I could hardly feel my fingers, they are tough.  Long story short, no seals today, but it made for a pretty cool video.