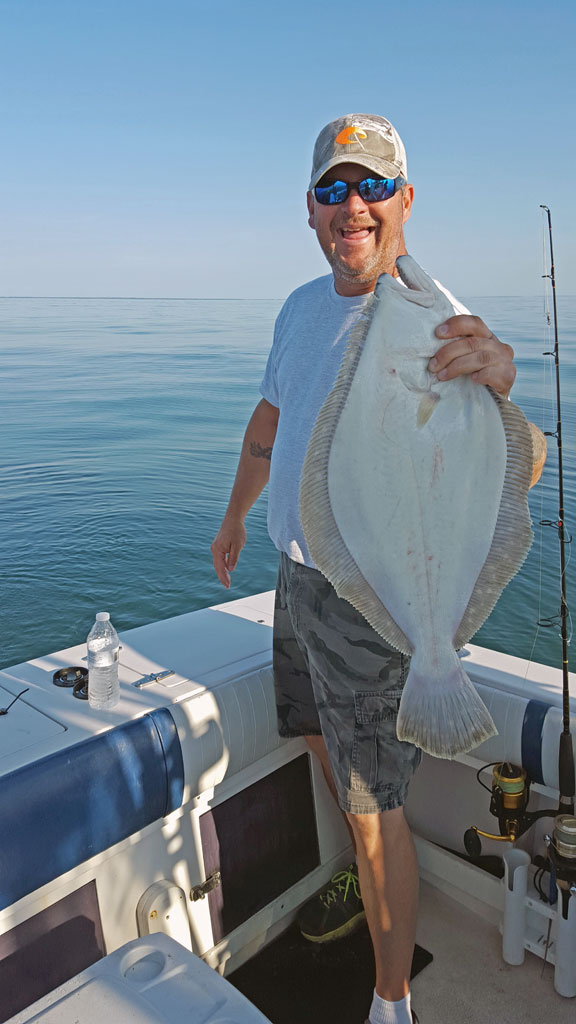 We have been doing a lot of fishing and not much posting. Time to take a vacation just to edit video!! 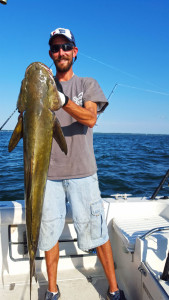 Nice one from the Chesapeake

So the latest good news is the red drum bite off Bayford VA. This run usually starts good the 2nd week of August. This year was no different, and the fish are still there now. After spending the last month fishing offshore it is a nice change to get back to the bayside. This fishery is fun and fairly easy to do. This time of year the large bull red drum seem to prefer to eat fresh fish instead of peeler crabs like the do in the springtime. This makes bait cheap and easy! We usually start with a couple peelers or a bag of blood worms and catch our bait. Out of Morleys wharf or Bayford VA there are deeper holes in the creek. Stop in these areas and drop small hooks down with bloodworms to catch spot and hardhead or kingfish. All of these make good drum baits. The best is spot, next is hardhead/kingfish and lastly bluefish, but all do work. No need to keep the small fish alive, you can get more baits out of them but cutting each one up. When cutting for bait we chop of the head, then cut the fish into 1.5″ wide pieces all the way to the tail. Typically we don’t use the head or tail even though the head is supposed to be a good bait. Well, screw the head I hardly catch anything on them, chum with that sucker… 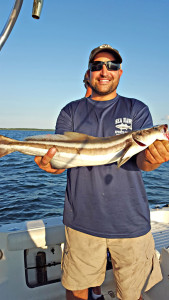 OK, now you have a bucket of 8 fish or so ready to turn into bait, what now? run out the creek, head to buoy 42, a red can, and look for the fleet. If its drum season you will see boats. There is nothing too special about this area, its fairly flat ranging from 23-27ft. Just pick a spot inside the marker and anchor up. The tide can really rock through here so use some extra rope and have some big sinkers, 6 and 8oz tongues work well. We use the same short leader fishfinder rig we use in the surf with an 8/0 gamakatsu circle hook. Take your chunk of fish, stick the hook though and back out and toss it over. Time to sit and wait and weed through sharks. Sharks and some rays are juts part of the game. 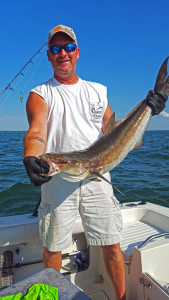 A chummed up Cobia

One thing I forgot to mention is that this is mainly and evening or night fishery. Lots of guys fish until 10pm and quite a few fish get caught after dark. I like to take a different approach we have time. Roll on down early in the afternoon, like 1ish. This gives you plenty of time to catch bait then do a little cobia fishing. This worked out damn good last week. Found plenty of baitfish in the creek, ran out and hit the bouy line for cobia. Saw one on the buoys, never got bit. Ran to a random shoal on the chart where it was 20ft and we put out a chum bag. Same setup as we do for the reds but we use bunk chunks here instead of the fresh spot and hardhead. I figure, we are dumping bunker chum in the water, the cobes like the smell, so use bunker as bait! Give em what they want. We had 3 cobia chumming in an hour and a half last week. one was aerobatic jumping out of the water a number of times! About 5pm we moved over to setup for the reds. Our buddy boat caught one but we never got our bite. O well, it was still early in the season, we will be back…. 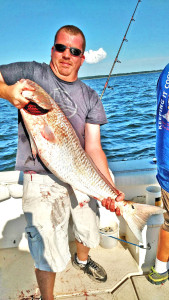 On to the latest inshore ocean fishing. The reef at Blackfish banks has been good to us all year until the last flounder trip we took a few days ago. Croaker had invaded the railcars. It was so bad it was hard to find the reef structure on the depth finder becuase of the schools of croaker on the bottom. We caught ONE flounder there, it sucked, left by 730am. We had to explore to find our fish, but the next drop had a tripleheader of flounder, hell yea! and NO croaker! By the end of the day we ended up at the artifical reef off Wachapreage Virginia (Parramore reef) This is very similar to the reef at blackfish except there is hardly any boats! well, maybe there was before I write this…. O well, come on down there is a LOT of structure around for everyone. We ended up with our limit of flounder a nice trigger fish and a few heavy seabass. A good trip and exactly what we hoped for. 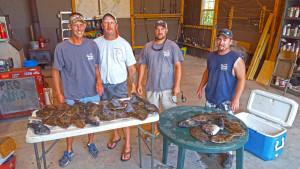 A nice catch of flounder from Mid August 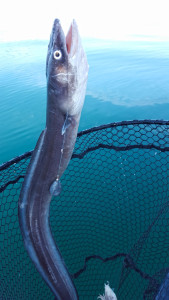 A big ass eel, never know what is down there

On to the offshore bite, if you can call it that. The offshore fishing this year has mainly changed to an overnight bite. So strange how techniques change from year to year. So two weeks ago we decided it was a full moon and would be a great night to camp out in the Washington canyon. We ran out to the bigeye hole, setup our spread and put boxing gloves on our riggers. Trolled with a group of about 16 other sport fishers well into the night. We saw / heard of 3 bigeyes caught a few yellowfin. Apparenly people were saying the full moon shut it off. hah, story of my life, day late… Well we stuck it out, trolling until 11pm without a sniff. Said hell with this trolling at midnight and setup 2 sword baits and went on the drift. Perfect drift taking us right over the east notch in the canyon and back into the deep. Had 2 bites on the drift both were something just sucking on our squid, swordie bite? Maybe? we will never know as they both just gaveup. At 2am everything changed, our drift picked up to 2 knots! A strong south wind picked up and started to blow things up. By three we were off the ledge in the deep and the sea was building. Screw this, we are outa here. Set a course for home, put her at 7knots trolling and set a spread out in the dark. Seas steady picked up, boys this is what they call a LTH, a long troll home, except we were FAR away, so this was a FLTH…. seas were bad the whole way and we took some shifts taking naps. Trolled to 20 miles off the beach before we picked up and ran home fishless, not quite our style, we will be back for revenge. 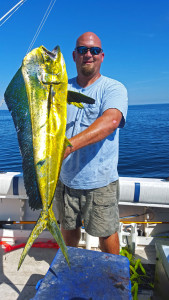 Caught this bull on a spinning rod, talk about a fight!

Last week we ran back to the canyon, it was FLAT, perfect day to troll up a white marlin. Hit the canyon, no bait and the whales were gone. Whelp plan B, troll the 50 line south through some beautiful blue water. And it was sure pretty, found dolphin flying fish, little tuna lookin baitfish jumping, everything looked right but not a single white showed up to play. Had a few dolphin bites here and there. Then we came up on a shark feeding frenzy, this was cool as hell to see. Mahi chasing small minnows on top, with sharks attacking the shit out of the Mahi. We passed over them a few times and the water was like a rainbow snowglobe full of mahi scales. Most sharks were about 5 footers, Duskys I think. Then on the last pass we saw the big boy, one of the fattest makos I have ever seen… Hes still out there somewhere. Ok time for Plan C, with no marlin bite lets run inshore drop a planer for a Wahoo. Ran 8 miles in set the planer rod down and it took 15 seconds literally and we were hooked up. Couldnt believe our luck, but in fact it was too good to believe, pull the fish boatside, perfect gaff shot, and, well… it didnt work out so well after that… Story for another time. O well, back to trolling for 5 minutes before we spot a floating ball. GAME ON. Pulled out the spinning rods and bailed some nice dolphin, an almaco jack and a large horse eye jack to salvage our day. Ran home in flat seas, but still need some offshore revenge… It will come…